Today is the last round of posts on India trip 2012. I shared my 6 Life-Changing Lessons from India a couple of weeks ago and then Irina, Gillian, Natalya, Tanya wrote about their incredible experiences yesterday. Today Katerina contemplates on her lessons learned from our unforgettable adventure. Smiles and Letting Go big time!

Learning to Let Go and Finding the Inner Child 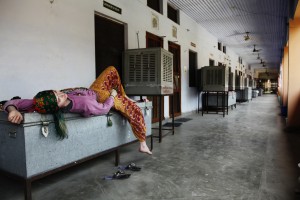 Katerina Gubina – an amazing photographer with a passion for exotic adventures and healthy food:

The spontaneous trip to India started with the thought of letting go of all the expectations, labels and the familiar patterns and just being open to new experiences of living at an ashram.

Nothing that we commonly label ‘normal’ was present at the ashram. We woke up to the gong at 4am, had Spartan living conditions, the surrounding environment was a chaotic mess of the wandering unrestrained bulls, cows, wild monkeys, or loud tooting motor bikes.

The first three days my body was shattering repeatedly “You’ve got to be kidding me!” But once the concept that ‘we are not our body’ was introduced, it became much more manageable to look at the body as an instrument, to let go of the soreness from sitting motionless for hours and surrender to the flow of brain twisters in lotus position – it was quite an intense practice on its own.

The reminders to appreciate unpredictability and to be fully present in the NOW, even when the experience is painful both physically and mentally, were popping up every day with the exciting force. The unique experiences brought back the colors of life and its fun patterns during the celebration of the Holi – the Festival of Color.

Many revelations came out of being at the Ashram.

Being open and letting go of the common and familiar helped embrace new experiences in Ashram, either the Holi celebration or throwing cow poop in the fire with the certain finger positions in obedience of the sacred ceremony and then accepting the cookie from the Guru’s hands with the same hands. Talk about experiences!

‘It’s a cruel and random world, but the chaos is all so beautiful.’ ~ Hiromu Arakawa

Acquaintance with Varanasi was powerful drop in the ‘let-go jar’. I was intentionally ignoring the travel guides so the experience would be more raw and with no expectations.

Varanasi made my eyes sore and even my camera was unable to capture the full range of the conflicting scene of one of the oldest cities in the world. The extremes of India looked the strongest there. The contrast of life and death, darkness and light was mesmerizingly powerful. The most disturbing mix of so many things and concepts at one place and one time: the city is so dense, concentrated and overly saturated. They say Varanasi changes you.

The Ganges is worshiped and the water is considered holy, but the amount of dirt and disorder on the riverbanks is beyond striking. The water is polluted with all kinds of dirt, plastic, yet the locals bathe there religiously and wash their clothing.

Aside from washing and bathing, bones left from the bodies after cremation are put in the water and sometimes serve as food for dogs. And at the same time the beautiful sets of flowers in observance of the sacred ceremonies are being set away to float on the water in hopes of purification.

Dare to try a sip of this holy smoothie from the Ganges? Yes, you can

Some people come to Varanasi to reach deep levels of meditation, do yoga or just sit and be aware. Ironically, they do it next to so called rest houses where sick people are kept right before they leave their bodies. Those people come to the rest houses with full awareness and expectation of death.

The powerful flow of energy, the Varanasi is famous for, is somehow mixed harmoniously with the flow of dirt, dead bodies and disabled people surrendering to the power of the water for the purification from the vicious cycle of life.

Directly behind the river is a labyrinth of filthy streets filled with burning piles of trash, dirty cows, flies, dogs and smells of oldness and decay.

Overwhelming persistent flow of the needy children with sad, sometimes harsh, sometimes greedy or friendly eyes. They look at you with such deep sorrow. At some point, I could not look any longer, not at them, not at the town itself. The strong feeling of wonder and repulsion was rising inside my mind that had trouble comprehending the whole scene.

(If the concept of Karma is applied, the thought of how bad or misbehaving the population of the country was in the previous lives to live in this extreme sickness and pain now in reincarnation was blowing my mind. What choices did they make to be accountable for?)

What mattered at that point is to see life between good and bad for what we know or see it. “Does new life grow out of rotting and decaying matter?”

The perfect quote came to my sight right after:

“Only if we are still enough inside and the noise of thinking subsides can we become aware that there is a hidden harmony here, a sacredness, a higher order in which everything has its perfect place and could not be other than what it is and the way it is.”

I was in the middle of the complete chaos, or I was letting the mind to put labels on the place around – either chaotic or disturbing. May be there was an inconceivable order to this place, that to the mind looked like chaos, because it was unable to understand it.

“It is beyond the mental category of good and bad. You cannot understand it through thought, but you can sense it when you let go of the thought, become still and alert, and don’t try to underhand or explain. Only then can you be aware of the sacredness of the forest. As soon as you sense the hidden harmony, that sacredness, you realize that, you become a conscious participant in it. In this way, nature can help you become realigned with the wholeness of life”.

Being in India does something to a person. It is impossible to come out of the India untouched as it shows such ‘raw’ side of life – joy or sadness. It is a country of wonders and extremes. 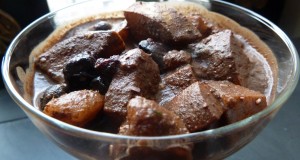