Anne is an incredible person, a devoted yogi, and one of the brave women participating in the 40 Day Journey to Bliss Program. Anne is a writer at heart but haven’t had a chance to share her passion with the world yet. Overcoming the fear of being ignored, dismissed, or criticized, that we all have, she took a leap of faith and wrote this.

This piece is about Anne’s discovery of yoga and some of yoga’s important concept such as self-love and letting go. Please take a moment to share your thoughts about Anne’s work. She would like to explore her writing side more and would love to hear your feedback!

Overcoming The Fear Of The Unknown

I was scared when I first thought about trying a beginner’s yoga class years ago. Would I look like a fool? Would I hurt myself?  Would everyone stare at me and think what a spaz I was? Would the teacher give up on me?  What if the other people were creepy?  What if I was asked to do weird things like chanting or humming or pretending to care about the Buddha? What if I got myself tangled into some position and couldn’t get out of it or what if I twisted myself somehow and was in agony the next day? What if I was just too stiff or too old to benefit from it? What if I was the only person in the class who couldn’t do something everyone else could do?

A new yoga studio had just opened up down the street from me and every time I walked past I became more curious about going in. One day I stepped in for a class schedule and caught a glimpse of gleaming hard wood floors inside. The faint smell of incense was immediately soothing. No one looked particularly weird and everyone smiled at me. Best of all, the first class was free.  So what did I have to lose? I had the time and I was going to take a beginner’s class after all. Baby steps, right? “Don’t be such an idiot!” (being tough on myself) “Just try one class!”

Maybe I was lucky in immediately entering the class of a great teacher, but I was soon hooked. The teacher was a joyous spirit who always made it seem that she was leading us on a great adventure, an exploration of the benefits of yoga. She spent weeks slowly introducing us to every configuration of sun salutes, moon salutes, warrior poses, animal poses (there are so many!), yoga to strengthen the hips, the shoulders, the alignment of the spine. We learned about chakras.  We learned about our skeletal structure and the wrapping of the muscles.  We learned different breathing exercises. We learned how to send the breath to parts of our bodies that felt tight.

Learning To Say Thank You – Better Late Than Never

Most importantly, she started every class by asking us to thank ourselves for simply showing up. Thank myself? I was used to yelling at myself, or at best thinking “well OK, at least that didn’t turn out so badly.” Or thanking the powers that be for protecting me from worst-case scenarios. But thanking myself?  Giving myself credit for just showing up? That was an alien concept to me. Maybe I could pat myself on the back (briefly) if I had managed to ace something, but that was about as far as it went. Raised by ferociously ambitious, perfectionist parents to always excel and compete, the idea of just thanking myself for trying was completely foreign. But the teacher was adamant that this was one of the key precepts of yoga.  In fact she joked that the hardest part of yoga was just getting on the mat.

It went deeper than that though. Being thankful for the ability to practice at all made us thankful for things we would normally take for granted. And it was equally important to be thankful for whatever physical or emotional state we found ourselves in on that particular day of practicing yoga.

What follows naturally from this mindset is that from gratitude comes acceptance. Accepting your body and your state of mind just as they are and working with them just as they are here and now. It doesn’t mean you don’t want to change anything, but it means you start from a positive place.

The Lesson From Elusive Bow Pose

But about the bow pose and why I love yoga. The first time we were introduced to the bow pose, I could barely manage to grab one ankle. “Half bow pose is fine too,” said the teacher. “Just work with that for now, that’s great.” Really? It didn’t feel so great to me, being half as good at a pose as people who could immediately grab both ankles and lift up into a full bow pose. But I had no choice. Try as I might, class after class, week after week, I could only reach the one ankle while the other one eluded me. I hated feeling inadequate, and then I hated that not being able to do something made me feel inadequate, and then I just hated having to struggle.

I knew that there were poses I could do that other people had difficulty with, but that wasn’t enough to turn off the critical voice in my head. “Don’t worry about anyone else in the class,” the teacher said.  “Close your eyes and connect with wherever your mind and body are at right now, remembering that both your body and your mind are constantly fluid and changing and every day different from the last.”  Really?  Was I ever going to be able to do a full bow pose?  Or was this simply my hideous fate, to always feel frustrated while others seemed to effortlessly flow up into glorious bow poses?

“If you strain and push yourself past where your body feels right, it will cause you pain and yoga should never cause you pain.”  Really? No pain no gain, right? But now we were being taught the complete opposite of that.

I shut my eyes. I decided not to care. I flailed around and tried to grab that other darn ankle. I sweated. I waited for the class to move on to something else. And then one day, there it was. I reached for my other ankle and there it was.  It felt like magic. I was so thrilled, I laughed out loud. I looked around to see if anyone else was as proud of me as I was and no one was paying the least bit of attention. Everyone was in their own bow pose, some straining, some serene.  My body had changed and done what I asked.  I felt that wonderful sense of accomplishment that comes with achieving a long-sought after goal.

I soon realized what every yogini realizes, that all bodies are different, that no one can do every pose, that there is always some pose that you can do easier than other people and vice versa, and that actually no one really cares what you do in yoga class except you.

Yoga is not a competitive sport.  It’s not a team sport.  It’s not a spectator sport. Yoga is you and the mat experiencing what your body can do with the help of a teacher, that’s it, and the benefits to your spine and your overall health are huge. 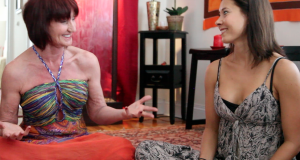 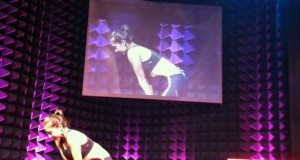