I know that most of you haven’t touched fast food in years but we still have family members or friends who do it. Whether we like it or not, we grow as a society, not just as an individual. The health and mental clarity of those around has a direct impact on our well-being and happiness.

It can be tempting to leave those who are not moving at your pace behind, but you are better than this. You can be an inspiration, an example, a guide in your surrounding. You can help others evolve. One step at a time. It will get easier, I promise.

For now, let’s start with small things. Help your friends and family choose healthier breakfast by sharing this article with them.

The food we eat for breakfast sets the tone for the day. The healthiest options (high in fiber and protein, low in sugar) are energizing and satisfying. Unhealthy options or poor food combinations can leave you feeling bloated, lethargic, and even hungrier than if you hadn’t eaten any breakfast at all!

In America the fast food breakfast market is valued at over $50 billion. Fast food chains keep developing outrageous new menu items to capitalize on the market. While some progress has been made towards increasing healthier options, fast food giants have also created indulgent new menu items to generate buzz and increase sales.

To attract existing lunch and dinner fans, fast food chains are using popular menu staples like fried chicken, steak and lots of cheese to create bold breakfast combinations. These new menu items are created at laboratories by market researchers, chefs and food technicians whose main responsibility is to maximize marketability and minimize costs. A lot of them rely of triggering appetite with salty and sweet tastes and a hearty amount of fats. Their creations are often high in calories, laced with GMO and synthetic ingredients and have dangerously high sodium contents. Unfortunately, many consumers perceive these menu additions as filling and tasty options.

Check out some of the worst offenders… 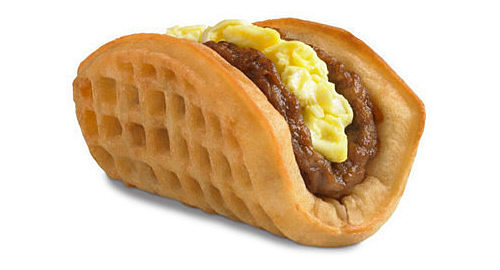 Taco Bell has recently entered the fast food breakfast market and generated significant press from consumers and media outlets with the release of the Waffle Taco. The Waffle Taco is a waffle wrapped around a sausage patty or bacon, with scrambled eggs and cheese, served with a side of syrup. Taco Bell hasn’t released nutritional content at the time this article was published.

The A.M. Crunchwrap looks like a mix between a quesadilla and burrito. It’s stuffed with scrambled eggs, a hash brown, cheese and bacon, sausage or steak in a flour tortilla. This 660 calorie item has 1270 milligrams of salt (almost half of the recommended daily intake) and over 40 grams of fat.

To state the obvious, anything on a fast food menu that starts with “double” is dangerous. The Double Croissan’Wich includes two helpings of cheese, egg product, bacon, sausage and ham. It has 660 calories, 48 grams of fat, 18 grams of saturated fat and 1,420 milligrams of sodium.

Unfortunately this burger is even worse than it sounds. The burger is layered with cheese, egg, bacon and hash brown nuggets. It has 780 calories, 51 grams of fat, 15 grams of saturated fat and 1460 milligrams of sodium.

We could discuss why eating a foot long sandwich in general is not a good idea, but this breakfast sandwich is particularly troublesome.

The Mega Breakfast Sandwich includes bacon, sausage, egg whites, and cheese on flatbread. It comes in at a whopping 1,310 calories, 79 grams of fat, 31 grams of saturated fat and 3,190 milligrams of sodium. 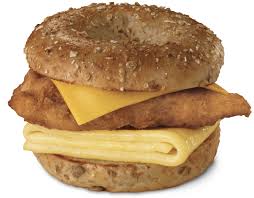 This multigrain bagel only looks innocent. It serves as the base for fried chicken, eggs and cheese. It has 480  calories, 20 grams of fat, 6 grams of saturated fat and 1,030 milligrams of sodium. 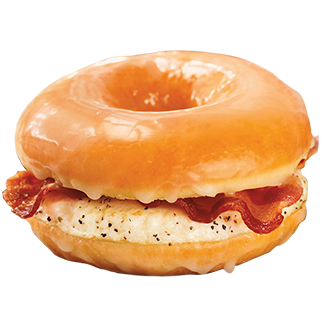 As if one doughnut wasn’t indulgent enough, this sandwich pairs two doughnuts with bacon and eggs.  It has 360  calories, 20 grams of fat, 8 grams of saturated fat and 720 milligrams of sodium. 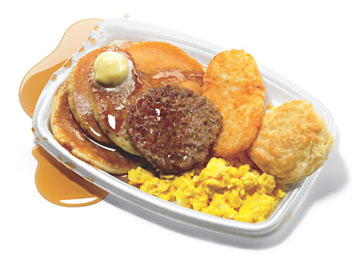 McDonald’s starting serving breakfast in 1975 and since then many new items have been added to the menu. The Deluxe Breakfast includes 6 items: pancakes, sausage, scrambled eggs, hash browns, bacon and a biscuit! The meal (without including the syrup, margarine or jam) has 1,070 calories, 55 grams fat, 18 grams of saturated fat and 2090 milligrams of sodium.

Besides outrageous calories all the above options are nutritionally empty, which can lead to feeling staffed but hungry.

Instead focus on nutrient rich foods and simple to digest options first thing in the morning. Start your day with a glass of warm or hot water and then have a smoothie, quinoa with almonds, eggs with greens, or a chia pudding.

Quinoa is really versatile and can be used in appetizers, entrees, sides, and even baking! Lately, I love having quinoa for breakfast. It gives me lots of energy as it is easy to digest and keeps hunger at bay!

To keep the cooking time short, I soak quinoa overnight.

Breakfast Quinoa with Fruits and Nuts

1. Put everything in a container and pour boiling water over the mixture.

3. Serve with a splash of almond milk or just plain.

The benefit of soaking dried berries and almonds over night is increased digestability. Dried fruits and nuts can be pretty heavy and difficult to break down first thing in the morning. Soaking and cooking them makes them moist, plump, and nourishing for all body tissues according to ayurveda. All the spices help kindle digestive fire and wake up the digestive system after a night of sleep. Ghee makes all the nutrients easier to absorb and adds richness to the dish. 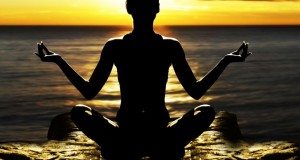 When listening to the body is not enough
Grab your Free Happy Belly jumpstart kit!
2 Video Classes and Ebook: Ayurveda tips to eliminate bloating, get regular & feel light